Buldeo is a male adult human who is often portrayed as a villain.

Soon after Mowgli left the jungle and was adopted by Meshua and Meshua's husband, he encountered Buldeo, the elderly (or at least middle-aged) chief hunter of Meshua's village. Buldeo was boastful and arrogant, and was furious when Mowgli, who knew what the jungle was really like, contradicted some of Buldeo's more fanciful stories about the jungle.

Buldeo hoped to catch the lame tiger (Shere Khan) so that he can claim the reward for the tiger's skin, but Mowgli (with the help of his wolf friends) killed the tiger first and refused to hand over the skin because he had vowed to lay it upon the wolfpack's Council Rock. When Buldeo threatened Mowgli, the wolf Akela intervened to stop him. Mowgli let Buldeo go, hoping that the matter would be settled, but instead Buldeo roused the village against him, claiming that Mowgli was a shapeshifting sorcerer. When Mowgli returned to the village the villagers drive him out; Buldeo tried to shoot Mowgli but missed.

Buldeo then persuaded the villagers that Meshua and her husband should be tortured and executed for harbouring a "devil child" and set out to hunt Mowgli. Mowgli was able to evade him easily, and ordered his wolf-brothers to chase Buldeo to exhaustion.

Mowgli then rescued his human allies and organised a series of animal stampedes, destroying the village and forcing the villagers, presumably including Buldeo as a "real devil", to seek refuge elsewhere.

Maxim Antinori's novelette Hunting Mowgli (2001) (ISBN 1-931319-49-9) centres around a meeting between Mowgli and Buldeo, but Antinori's Buldeo is a much younger and more intelligent man, so that the conflict between him and Mowgli is much more evenly matched and he actually succeeds in killing one of Mowgli's animal friends. Antinori's story is much darker in tone than Kipling's, and despite borrowing the basic concept and names has no continuity with the original stories.

He was also originally going to be in the Disney version of The Jungle Book, and can be heard in a cut song ("The Mighty Hunters") on the DVD, singing a duet with Shere Kahn. 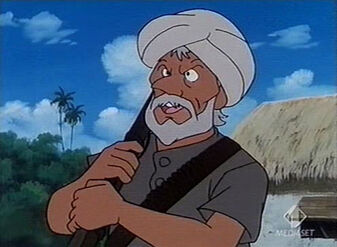 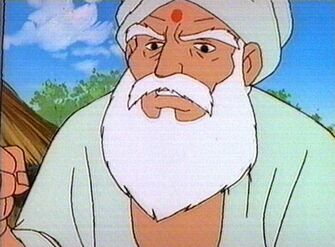 Add a photo to this gallery
Retrieved from "https://junglebook.fandom.com/wiki/Buldeo?oldid=10629"
Community content is available under CC-BY-SA unless otherwise noted.