Kaa the Rock python was Mowgli's wise mentor. He, Baloo and Bagheera sang for Mowgli "The Outsong" of the jungle. Kaa was a huge and powerful snake, unusually long, more than 100 years old and still in his prime. Bagheera and Baloo enlisted Kaa's help to rescue Mowgli when the man-cub was captured by the Bandar-log and taken to an abandoned human city. Kaa broke down the wall of the building in which Mowgli was imprisoned and used his serpentine hypnosis to draw the monkeys toward his waiting jaws. Bagheera and Baloo were also hypnotized, but Mowgli was immune because he was human, and broke the spell on his friends.

Years later Kaa convinces Mowgli to visit a treasure chamber guarded by an old cobra beneath an ancient city. The cobra tried to kill Mowgli but its poison had dried up. Mowgli took an ankus from the treasure to keep as a weapon.

In later years Mowgli asked Kaa for help when his wolf pack is threatened by rampaging dholes (the red dogs of the title). Kaa goes into a trance so that he can search his century-long memory for a stratagem to defeat the dogs.

With Kaa's help Mowgli tricked the dholes into attacking prematurely. Kaa took no part in the resulting battle, but Mowgli and the wolves finally killed all the dhole, though not without grievous losses.

Mowgli is being hypnotized and is wrapped up in Kaa the python's coils.jpg 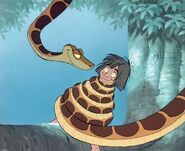 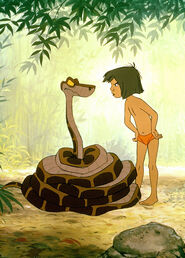 Shanti is looking at Kaa the Python's eyes.jpg 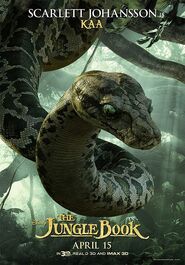 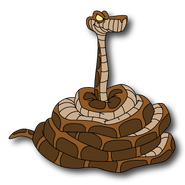 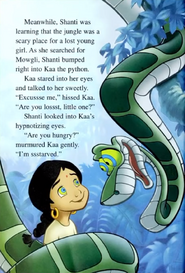 "Well Well Little Man Cub, Stop Doing Much Here? Where you Come From?!" 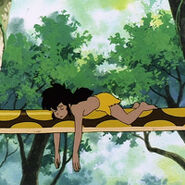 Add a photo to this gallery
Retrieved from "https://junglebook.fandom.com/wiki/Kaa?oldid=10787"
Community content is available under CC-BY-SA unless otherwise noted.