Shanti is a minor character in The Jungle Book and the tritagonist in the sequel. She is Mowgli's village friend and possible love interest who was voiced by Darleen Carr and later by Mae Whitman.

When Walt Disney and his creative crew couldn't advise a way to lure Mowgli into the Man Village, one member then suggested having a girl lure him into the village, and the idea stuck. Though Walt actually got the idea himself after reading the endings to both volumes of The Jungle Book. Despite advising his story team and animators not to read Kipling's original novels. From there he found it in The Spring Running from The Second Jungle Book, was a scene at the end where Mowgli watches a minor girl character that strolled down a path . Shanti was a polite, quiet, sweet, and beautiful young lady in the first film, and in the second film, she transformed into a careful, timid yet still sweet Girl.

Shanti is a beautiful young girl who has an obvious crush on Mowgli but has great fear of the jungle in contrast to Mowgli's obsession of it. She fears nearly every animal the jungle has to offer including snakes, tigers, bears, and even bats. Shanti and Mowgli both have different opinions on the jungle usually leading to friendly or sometimes serious arguments. Even though there is no relation, Shanti treats Mowgli's adoptive brother Ranjan as if he's her little brother. She takes some of her time to feed Ranjan, burp him like an infant, change his clothes, and teach him how to behave and stay safe.

Shanti makes her brief appearance near the end of the Jungle Book, but she was not named until the sequel. On the way to the man village, Mowgli spots a creature he has never seen before: a girl. Mowgli requests a better look, but Baloo attempts to stop him, resulting in failure. Mowgli watches Shanti as she sings about her life. Mowgli falls off the tree he was peaking on and is easily noticed by Shanti. Shanti lures him into the village by purposely dropping her jug. Mowgli refills the jug and follows her into the village.

Shanti makes her biggest appearance in The Jungle Book 2. She thinks that Mowgli is a bad influence on Ranjan. After Mowgli and Ranjan play a prank on Shanti as she collects water from the river outside the village, she takes Rajnan back to the village and lectures him. It soon goes into a song called "Jungle Rhythm". Mowgli almost leads all the children to the jungle until Shanti yells, "Stop!" Soon Ranjan's father comes to tell the children, including Mowgli, to come back. Mowgli is then punished. That night, Shanti brings a bowl of fruit to Mowgli's hut as an apology. Little does she know that Shere Khan is waiting in the shadows of the village for Mowgli. Shanti soon finds Mowgli with Baloo and she shouts that there is a wild animal. This awakes the villagers and they attacked Shere Khan, unaware he is not the only wild animal. During the havoc, Baloo and Mowgli flee for the jungle. Shanti goes after them, not knowing that Ranjan had followed. As she searches for Mowgli, she encounters Kaa, the snake. He hypnotizes her and is about to eat her until Ranjan saves her by hitting the snake with a stick. But her underpants are lose after been pulled, so she pulled it back up. The next day, as they still search for Mowgli, Shanti finds mango peelings. Later, she finds Mowgli, but Baloo attacks. He gets caught in some vines, and she punches him in the nose.

Mowgli accidentally reveals that he asked Baloo to attack her. She then runs off in anger with Ranjan in tow. Mowgli goes after them to apologize and finds them standing in fear as Shere Khan has found them. Mowgli then throws dust at him, and they run. Shere Khan goes after them. Mowgli tells Shanti and Rajan to stay hidden and continues to run. Shanti then follows after Mowgli and the tiger as Ranjan meets Baloo and warns him of what is happening. The chase leads to an ancient temple where Baloo, Mowgli, and Shanti hide among its shadows. She meets Baloo and they start arguing until they both say that they are helping Mowgli. Soon they hide behind a gong and bang them, confusing Shere Khan. However, Shanti's gong falls, showing herself to Shere Khan. He threatens to kill her if Mowgli does not show himself. He soon does and Shere Khan attacks. Baloo fights off the tiger long enough for Mowgli and Shanti to escape. The two run and leap upon a huge stone tiger head. As they climb, Shere Khan goes after them. However, the stone head collapses and it falls with Mowgli, Shere Khan, and Shanti. Luckily, Baloo catches Shanti and Mowgli grabs her foot as Shere Khan falls to a ledge, and is then trapped by the head. Soon Ranjan's parents and Shanti's mother find them and they return home, where Ranjan's father now understands that the jungle is a part of Mowgli. At the end of the film. Mowgli and Shanti go to collect water from the river. They, along with Ranjan, soon meet Baloo and Bagheera and sing a reprise of "The Bare Necessities".

Shanti is not seen nor mentioned by name, but like in The Spring Running, Mowgli encounters an unnamed girl in the jungle, who was shocked at the sight of him and ran off back to the village. Like Disney's version, she was collecting water in a jar.

Shanti appears at the very end of the game although her voice can be heard humming a song in the middle. Following the story of the film, Mowgli meets Shanti and the two become smitten with one another. As Shanti begins to return to the village, she invites Mowgli to join her, which he accepts.

Shanti herself does not appear in the game but she is mentioned by Mowgli when he assigns the player one of his tasks. This is one of the only pieces of media that refers to Shanti as her name given in The Jungle Book 2 rather than simply "The Girl". 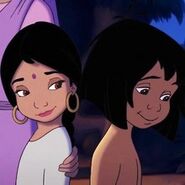 Mowgli and Shanti are both climbing a cliff.jpg

Mowgli is finally back with Shanti and Ranjan.jpg

Shanti is giving Ranjan a piggy back ride.jpg

Ranjan's father apologizes to Mowgli for being too harsh with him and not understood that the jungle is a part of who he is. 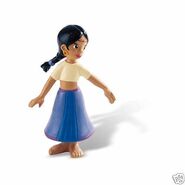 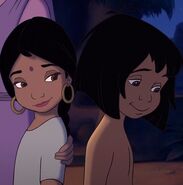 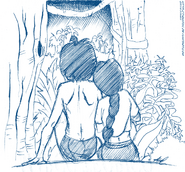 Shanti has feelings for Mowgli.jpg

Shanti is extremly angry at Mowgli and Ranjan.jpg 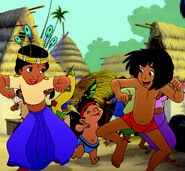 Mowgli is telling Shanti that danger is near.jpg 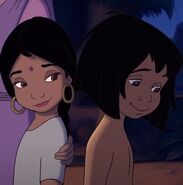 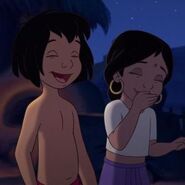 The-jungle-book-2-movie-still-shanti-and-baloo 1706965-400x305
Add a photo to this gallery
Retrieved from "https://junglebook.fandom.com/wiki/Shanti?oldid=10855"
Community content is available under CC-BY-SA unless otherwise noted.