Shere Khan is a male Bengal tiger of the Indian jungle and the main antagonist in the 2016 Jungle Book. 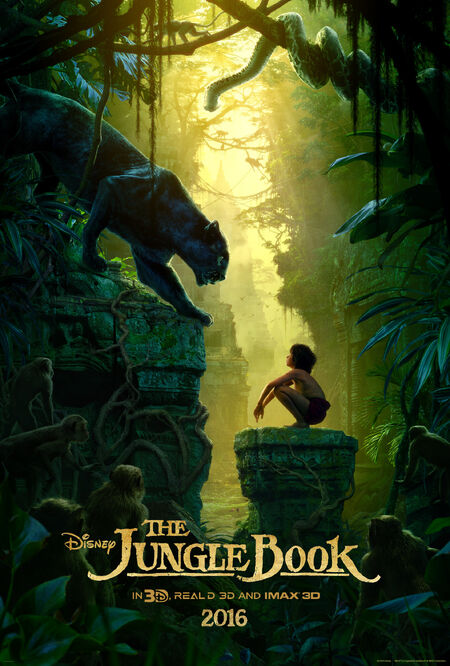 Shere Khan first appears during the drought, when the animals gather to drink at the Water Truce; the watering hole at which all animals drink without attacking each other, although the presence of tiger frightens them. When Shere Khan smells Mowgli, he is confronted by the Seeonee wolf pack led by Akela, who states that Mowgli belongs to their pack. Shere Khan mockingly scoffs at this and wonders when man was allowed to be adopted into the jungle. When Akela defends Mowgli, Shere Khan shows the scarred side of his face to remind the animals at the Water Truce of what a grown man is capable of. He then says that the law of the jungle states that man is forbidden. Raksha, however, retorts that Shere Khan also commits deeds forbidden in the jungle, stating that he hunts for pleasure and kills for power, and firmly states that Mowgli is her cub. Shere Khan, respecting the sanctity of the Water Truce, gives them until the monsoon season to hand Mowgli over before leaving. This causes Akela and his wolf pack to debate whether to have Mowgli leave the jungle or not, resulting Mowgli to leave the wolf pack with Bagheera to head over to a near-by Man-village.

Shere Khan next appears when Bagheera is escorting Mowgli to the Man-village. He stalks them through a herd of Buffalo and attacks Mowgli, only to be attacked by Bagheera. They fight viciously, but Shere Khan easily overpowers and injures Bagheera. He then chases after Mowgli through the stampeding buffalo, but Mowgli outruns him, escaping with the herd, much to Shere Khan's fury.

Shere Khan returns to the Seeonee pack and discusses Mowgli with Akela, who states that Mowgli has left the jungle, meaning that the pack and the tiger no longer have a quarrel. However, a furious Shere Khan kills Akela by throwing him off a cliff before instating himself as the pack's alpha. He then tells the wolves to spread the word of Akela's death, hoping it will lure Mowgli to him.

During her encounter with Mowgli, Kaa reveals that Mowgli and his father were traveling from one village to another when Shere Khan encountered them. Shere Khan killed Mowgli's father, but ran away after being burned by the red flower's touch, leaving Mowgli to be adopted by Bagheera and the wolf pack.

While reigning as the pack's leader, Shere Khan tells stories to the wolf pups about the other creatures of the jungle (in particular, the cuckoo, which preys upon the love of the other mother birds in order to deposit its own egg into their nest, starving them while benefiting its own chick). He directs his story at Raksha, citing her love for Mowgli as a sign of weakness. When Raksha asked why Shere Khan is doing this, he states that he wants Mowgli dead and that he'll be waiting when Mowgli returns. When King Louie informs Mowgli of Akela's death, he returns with a torch stolen from the Man-village and accidentally starts a forest fire.

Mowgli faces Shere Khan at the Water Truce, where the tiger shows the boy has become a man in his use of fire, and that all the other animals now fear him because of it. Mowgli then throws the fire away, allowing Shere Khan to attack him, only to be confronted by Baloo, Bagheera, and Raksha and her pack, who cite their code as they defy him. Shere Khan attacks regardless, saying he will have them all in his teeth, and fights Baloo, the wolves, and Bagheera, who give Mowgli enough time to run to the burning jungle. Shere Khan pursues him to an old strangler fig tree, and chases him into it, not knowing he has been lured into a trap. As he faces Mowgli, he mocks the boy, saying that he never would allow him to grow old and that he will kill him as he killed Mowgli's father and Akela, mockingly asking how much longer the man-cub thought he would last against him than they did. Mowgli replies that he is not afraid of Shere Khan and is done running from the tiger, goading him into pouncing before swinging away to safety. However, the branch Mowgli was standing on is too weak to hold Shere Khan's weight and it breaks off, sending the tiger plummeting to his death in a fiery pit below the tree.

Jungle Book Wiki has a collection of images and media related to Shere Khan (2016) which can be found at Shere Khan (2016)/Gallery.
Community content is available under CC-BY-SA unless otherwise noted.