Mowgli is a man-cub raised by the Indian wolf Raksha and her pack led by Akela ever since he was brought to them as a baby by the black panther Bagheera. Bagheera trains Mowgli to learn the ways of the wolves but Mowgli faces certain challenges and lags behind his wolf siblings, and Bagheera berates him for using human tricks like tool building, instead of learning the ways of the pack.

One day, during the dry season, all the animals in the jungle gather at the Peace Rock to drink the water that remains as part of the Water Truce, a timeout called during a drought that enables all animals to gather at a water hole without fear of being eaten by larger, more predatory animals. The truce is disrupted when the fearsome Bengal tiger Shere Khan detects Mowgli's scent amongst the crowd, and threatens his life since man is not welcome in the jungle. He holds the scars on his face as evidence of man's cruel and destructive nature; Mowgli's father burned his face when he tried to attack him and Mowgli. He issues a warning that when the Water Truce ends and the Peace Rock disappears, he will kill Mowgli, and leaves. Soon after, a debate and argument arises amongst the wolf pack as to decide whether they should keep Mowgli. However, before a consensus is reached, Mowgli voluntarily decides to leave the jungle for the sake and safety of his pack, with the agreement of Bagheera, who volunteers to guide the man-cub to the human village nearby.

Enroute, Shere Khan ambushes them, injuring Bagheera while Mowgli manages to escape with the help of a herd of water buffaloes. Mowgli, now alone, stumbles upon a thick canopy where he meets Kaa, an enormous Indian python who lures him in with promises of safety and an assurance that she knows who and what Mowgli truly is. Kaa's hypnosis shows Mowgli a vision of his father being killed by Shere Khan and of himself as an abandoned infant being found by Bagheera and also warns of the destructive power of fire, as the animals call the "red flower". Having hypnotized him, Kaa attempts to devour Mowgli, but he is rescued by a Himalayan brown bear-resembling sloth bear named Baloo. In exchange for saving Mowgli's life, Baloo tells Mowgli to fetch him honey which is atop a cliff, to which Mowgli reluctantly agrees. Together, they form a close bond as Baloo request's him that they should work as a team as Baloo's power and Mowgli's tricks to get things easily will help them both so Mowgli decides to stay with Baloo until the winter season arrives. Meanwhile, Shere Khan returns to the wolf pack. Asking about Mowgli, Akela answers that he had left the jungle. Furious, Shere Khan throws him off the nearby cliff, killing him. Confident that Mowgli will return, Shere Khan takes over the pack so as to lure Mowgli to his death.

When Bagheera returns to fetch Mowgli, he discovers that Mowgli has decided to live with Baloo, and has utilized various equipment, to his anger. A heated debate flares, with all agreeing to sleep on it until the morning. At night, Mowgli hears a cry for help and discovers that a baby Indian elephant is trapped in a deep pit. Using his equipment and tricks, he fashions a vine rope to rescue the baby elephant, forming a bond with the elephants.

While watching, Baloo agrees to Bagheera's plan to lie to Mowgli saying that he never considered him a friend, hoping that the boy will change his mind about staying with him. While on a tree, Mowgli is suddenly kidnapped by monkeys who present him to King Louie, a Bornean orangutan-resembling Gigantopithecus who tries to coerce Mowgli into giving up the secret to the "red flower". Baloo arrives to distract the monkeys and Bagheera leads him out secretly, but ends up being discovered. King Louie chases Mowgli through the temple, causing it to crumble and knock him out, but before this, he informs Mowgli of Akela's death. Furious that Baloo and Bagheera never told him, he angrily asks Bagheera about Akela's death, to which he answers that they were going to tell him about it. Mowgli decides to return to confront Shere Khan.

Mowgli soon ventures into the village and for the first time, he sees his own kind from a distance and gazes in amazement at the civilization, and at the huge bonfire in the center. He steals one of the torches and heads back to the jungle. Spotting him, Baloo and Bagheera follow him in close pursuit. Along the way Mowgli accidentally starts a wildfire.

When news breaks out that a man with the "red flower" is making his way into the jungle, all the animals gather near the submerged Peace Rock. Upon arriving, Mowgli confronts Shere Khan, who tricks him into making himself the enemy by causing the wildfire and living up to humans' destructive reputation. Mowgli responds by throwing the torch into the water, allowing Shere Khan the advantage. Bagheera, Baloo and the wolf pack manage to hold the tiger off, thus buying Mowgli enough time to set a trap in the burning jungle. He lures Shere Khan up into a dying tree and onto a fragile fig branch, which breaks under the tiger's weight. Shere Khan falls to his death into the pit of fire below.

With the aid of Mowgli, the Indian elephants soon after extinguish the wildfire by diverting the river's current. In the aftermath, Raksha then becomes the new Alpha and leads the wolf pack. Mowgli decides to utilize his equipment and tricks for his own use, having found his true home and calling, with the animals and his newfound companions, Baloo and Bagheera.

Directed by Jon Favreau (Iron Man), based on Rudyard Kipling's timeless stories and inspired by Disney's classic animated film, The Jungle Book is an all-new live-action epic adventure about Mowgli (newcomer Neel Sethi), a man-cub who's been raised by a family of wolves. But Mowgli finds he is no longer welcome in the jungle when fearsome tiger Shere Khan (voice of Idris Elba), who bears the scars of Man, promises to eliminate what he sees as a threat. Urged to abandon the only home he's ever known, Mowgli embarks on a captivating journey of self-discovery, guided by panther-turned-stern mentor Bagheera (voice of Ben Kingsley), and the free-spirited bear Baloo (voice of Bill Murray). Along the way, Mowgli encounters jungle creatures who don't exactly have his best interests at heart, including Kaa (voice of Scarlett Johansson), a python whose seductive voice and gaze hypnotizes the man-cub, and the smooth-talking King Louie (voice of Christopher Walken), who tries to coerce Mowgli into giving up the secret to the elusive and deadly red flower: fire 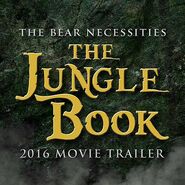 "Not full hibernation, but I nap. A lot." 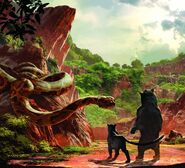 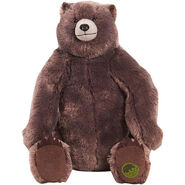 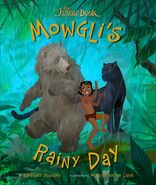 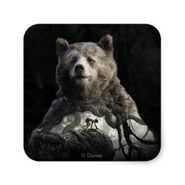 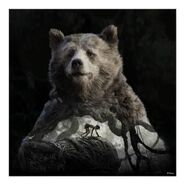 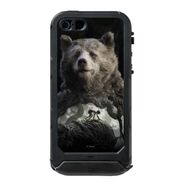 Differences with the animated filmEdit

Retrieved from "https://junglebook.fandom.com/wiki/The_Jungle_Book_(2016_film)?oldid=10294"
Community content is available under CC-BY-SA unless otherwise noted.